What can Entrepreneurs and small business owners learn from the No-Hitter by Cole Hamels and the Philadelphia Phillies on Saturday 7/25/15? Actually there are many lessons: persistence, hard work, striving for perfection of your craft, loyalty to employees who have performed well, changes in management for improved results…you can probably name some others as well. 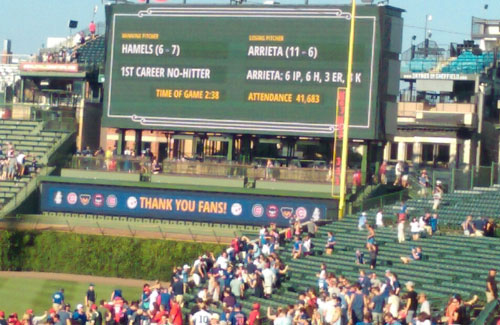 If you are a baseball fan, like I am, then you know that the Phillies have had a bad year up to the all-star break in 2015. They currently have the worst record in baseball but a few years ago they were regularly winning their division, playoff games and even the World Series in 2008. Recently they changed Managers where Ryne Sandberg, Hall of Fame Player (for the Cubs I might add) stepped down and Pete Mackanin took over for the rest of 2015.

After the MLB All-star break the Phillies have won 7 of the 8 games they played! It is probably a coincidence that this happened in Sandberg’s old haunt, Wrigley Field, or is it? The Phillies seem to have renewed spirit…it is important in life and in business to find a way to renew your energy and passion for your business even after going through the worst of times. This is what the Phillies seem to be doing under new manager Pete Mackanin. Despite the hardships of the year the Phillies have found new life and energy to once again compete like they used to in the not so distant past.

If you have had some setbacks in your business where you are putting forth the same or additional efforts but have not been getting the good results, the key is persistence and attitude, follow the example of Cole Hamels and the Phillies. The last 2 outings Hamels had a 19.89 ERA (if you don’t follow baseball, FYI that is really bad), this from the 2008 World Series MVP, but Hamels is a professional and kept a good attitude despite the difficulties, he found a way to shake it off, keep working hard until his performance once again matched his efforts.

One of my favorite sayings is “Luck is the corner where preparation meets opportunity” Cole was prepared and on Saturday the opportunity appeared, for Cole to get the only the 3rd No Hitter of the year in the MLB (Heston and Scherzer also had no-hitters this year), and the 13th in the long history of the Philadelphia Phillies.

Back to the game itself…

It was a day that started like many others this year for the Phillies, Cole Hamels had issued a walk with the first 5 pitches of the game, the second batter hit a ball really long that the Chicago faithful thought might leave the yard for a homerun.

…today would be different…

The wind was blowing in, so that long fly ball just became out number one. The Phillies had an opportunity for a double play on the next batter, while they didn’t convert it, they got lucky again because the force play at 2nd base looked questionable but was not eligible for review. Then Cole Hamels struck out the next batter for the 3rd out in the first inning.

The first hitter of the second Hamels puts away with a 96 mph fastball. Then a routine ground out to third and another strikeout on a fastball. This for a pitcher who himself said he has been ‘in a rut’ lately.

The Cubs walk the Phillies Rookie who has been on fire, Mikel Franco, and pitch to Ryan Howard with 2 out and 2 on, Ryan promptly hits a 3 run homer in which gives the Phillies the runs they need to support Cole Hamels outing. This is the lesson in loyalty…Ryan Howard had been an integral part of the winning years in the not so distant past of the Phillies. In the off season he had been bad mouthed by the General Manager, as not being a valuable part of the team. The Phillies organization had stuck with Howard this year after all and he has been regaining some of his power numbers, and came through when needed in this game of historical importance.

Hamels gets his 4th strikeout to start the 3rd, then a weakly hit ball back to Cole for a groundout, and a routine groundout to shortstop…8 in a row retired by Hamels. A nice performance, but too early at this point to get excited (don’t get me wrong I still was excited, did I mention I am a fan of the Phillies and they have the worst record currently…it is nice to have a little something to hold on to).

All the while the scouts from other MLB teams are taking note of Hamels performance…
(The question arises…does this no-hit bid just increase the value the Phillies will get in a trade or does it convince the Phillies that he is too valuable to trade?)

Cole lays down a perfect bunt to get the runner over in the 4th (showing good control with the bat as well as pitching the ball). The 4th Inning for the Cubs starts with a strikeout on an 80 mph curveball, then a fly out to right field, and finally a strikeout on an 86 mph change-up. You start to get the sense that today is a good day for Cole and a bad day for Cub hitters, 80 mph curveballs and 96 mph fastballs…how can you make that adjustment in unless you guess right.

5th Inning starts with 2 fly outs to right, then a good running catch by the center fielder for the 3rd out.

6th Inning starts with Hamels 7th and 8th strikeouts for 16 straight batters retired, followed by another walk to lead-off hitter, (for the 2nd walk of the game both to the same batter) Fowler who steals 2nd, then Hamels records his 9th strikeout on a cutter. A brief mention by the announcers that he has not allowed a hit.

While the Phillies bat in 7th Cole sits calmly next to Chooch, Carlos Ruiz, “Chooch” his catcher who has caught 3 other No Hitters in his career to that point (4 total now!).

Cubs half of the 7th inning starts with a batter fishing for the change up for Hamels 10th strikeout, then frustrating the next batter who broke his bat over his knee after striking out (#11), then Hamels gets a 12th strikeout to finish the 7th – his longest no hit outing of his career to date. (He had pitched 6 no hit innings as part of a combined no-hitter by the Phillies on 9/1/14).

Then in the 8th inning the Cubs decide to give the Phillies a couple more runs with a bloop by Freddy Galvis with one on, that turns into an inside the park homerun, officially a double with 2 errors. Then Hamels flashes his own bat with a double out to the ivy at Wrigley (What a day!).

In the 8th inning after hitting and running the bases, Hamels induces a fly out to right, followed by a scary out at the back of the warning track in centerfield, and finally a sharply hit ball back to Hamels, where Cole got to show he is a good defensive player as well. Cole had it all going, arm, bat, glove!

In the Phillies half of the 9th Howard hits a deep ball for that bounces for ground rule double over the ivy covered fence. While Howard did not score, it is great to see the power of his bat that we missed the last couple of years.

Back to Hamels, Cole starts out the 9th inning with an exciting infield ground out, then Fowler who has walked twice takes a called strike 3, the crowd in Chicago is on their feet… 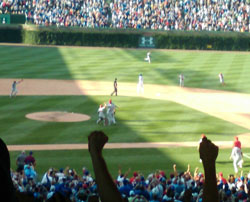 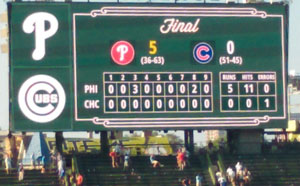 …but somehow he stills comes up with the ball to save the No-Hitter for Hamels.

On a 94 degree day, Win #114 for Hamels Career goes down in the history books. The cubs prior to the game had the longest stretch without giving up a no-hitter which stood at 7,920 consecutive games, about 50 years ago was the last I believe by Sandy Koufax.

Wishing you as much success in your business as Cole Hamels is having for his baseball career. I encourage us all to take the example, keep working on perfecting the products and services you provide to your customers. Keep a positive attitude through the tough times to Make Your Business Bloom!